Medicine and art; the black death in Europe

Ideas and actions of the past can help us to appreciate modern healthcare and understand where our system of healthcare came from. The most interesting of sources to learn these things from is, of course, art. Whether you enjoy it or not, visual art can tell us valuable things about culture, technology, and knowledge of the past.

Before we start, let’s set the mood: It’s the 1340’s... The black death (bubonic plague) has reached Europe, starting in central Asia, and is becoming the worst of many pandemics that took place between the 14th and 19th century. Death and disease are all around, and the plague will end up taking an estimated one third of the European population at this time. No viable treatment was available, relevant medical knowledge was a rarity. With the intention of better understanding the past, and learn about plague treatment now, some illustrations will be discussed.

For citizens of the 14th century, the cause of the plague was a mystery. The black death seemed to strike at random, regardless of class or age. As with many things that could not yet be explained, the reason of illness was attributed to divine powers. Some thought the plague to be the return of the 6th biblical plague (boils). Groups of desperate individuals arose who travelled around performing rituals of (self)harm by use of whips and other instruments. By punishing themselves before God, these flagellants hoped to be spared of the plague. 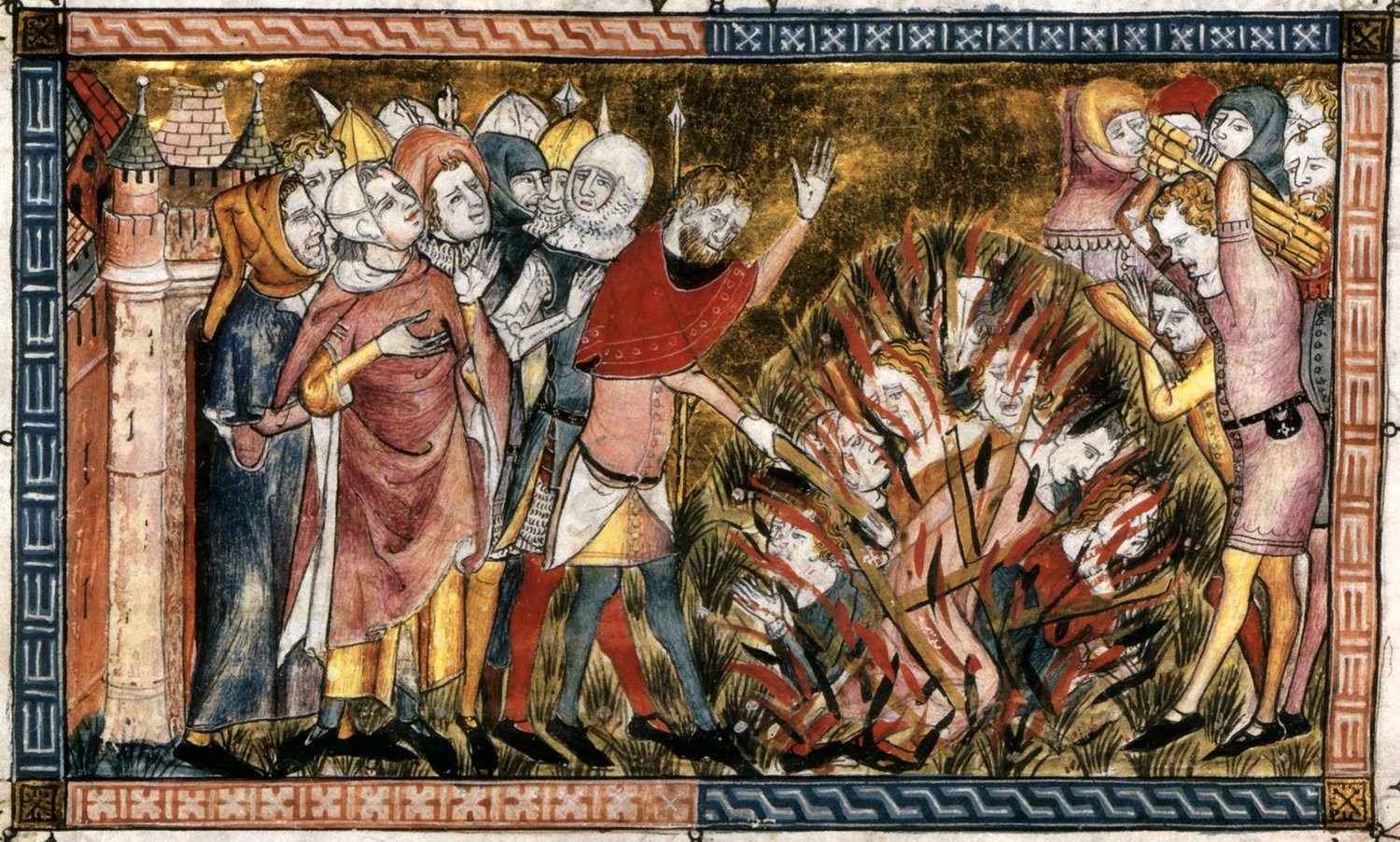 But by far the cruelest suspected cause is shown in the illustration above. In the minitature, townsfolk can be seen burning Jews outside the city walls. Antisemitism has always been present all over the world, and the medieval period was no exception. The Jewish population was seemingly  less affected by the plague, which led to tragic conclusions. Stories are known of towns accusing the Jewish citizens of poisoning wells, thereby spreading a plague sent by the devil.

The reason Jews seemed to have a lower chance of getting the plague is theorized to be their religious rules on hygiene.

We now know the plague to be a bacterial infection, caused by the Yersinia pestis bacteria. Y.pestis is spread most commonly by flea bites, rodents, or bodily fluids. By bathing and cleaning more often than the average citizen, Jews lowered their chance of coming in contact with disease carrying fleas or rodents.

After infection Y.pestis multiplies in the lymph nodes, swelling them to form painful bubo (a form of lymphadenitis). It then spreads to the organs as the inflamed bubo break down or rupture. If the infection starts in the lungs, bubo may not appear (pneumonic plague).

Symptoms of the bubonic plague include: formation of bubo in the groin, armpits or neck, fever, headache, fatigue,muscle aches, gangrene of the toes and fingers (complication). After the start of these symptoms, the disease is fatal within a few days.

Recognition of these symptoms by 14th century caretakers was not a given. Any disease involving bumps or dark spots on the body were often grouped under the plague.

Members of the clergy, who would usually provide medical care, and citizens were both not legally allowed to perform any treatment involving blood. These procedures were carried out by university educated doctors or by a barber surgeon. This shows a form of medical specialization.

In the miniature shown above with this text, we can see a barber surgeon performing a bloodletting treatment. It was believed in the 14th century that disease is a state of ‘imbalance between fluids’. The 4 body fluids recognised were black bile, yellow bile, phlegm and blood. To have too much of one or the other meant having bad fluids which held disease. To ease symptoms of the plague, a so-called excess of blood was released from the veins by a cut or by the use of leeches. A similar treatment was common where bubo, or plague biles, were cut open to let out the fluid inside.

Bloodletting as a treatment has since been proven to have no positive effect. Excessive bloodletting leads to anemia and eventually death. In the case of the plague, releasing bubo fluid or blood may facilitate spreading of the disease.

Many other cures and prevention methods existed, all equally ineffective.

The only known effective treatment for the plague is antibiotics, as it is a bacterial infection. Patients today are admitted to a hospital for observation, as treatment may have to be changed depending on the disease progression.

By medieval times, most cities had learned to bury their dead outside of the city walls. People did not know of bacteria and viruses, but most understood that disease could be contagious. Lepers and plague victims were wisely avoided on the streets. Italian sea harbours were a medieval example in Europe of disease prevention by isolation of the infected. Boats were shunned from the harbours if they carried disease, and here plague victims were first reported to be gathered in plague houses outside the city. Without working medicine, isolation of the infection was the only effective action to be taken to control the disease. Lowering the heightened chance of contamination in crowded cities would have had a noticeable effect.

Still  the plague hit Italy, with its many seaports, hard. This gave the 1340’s pandemic the name ‘Florentine plague’, after the Italian city.

An Italian writer, after surviving the pandemic wrote the following on the disposing of diseased in Florence: ‘’Although the cemeteries were full they were forced to dig huge trenches, where they buried the bodies by hundreds. Here they stowed them away like bales in the hold of a ship and covered them with a little earth, until the whole trench was full.’’ 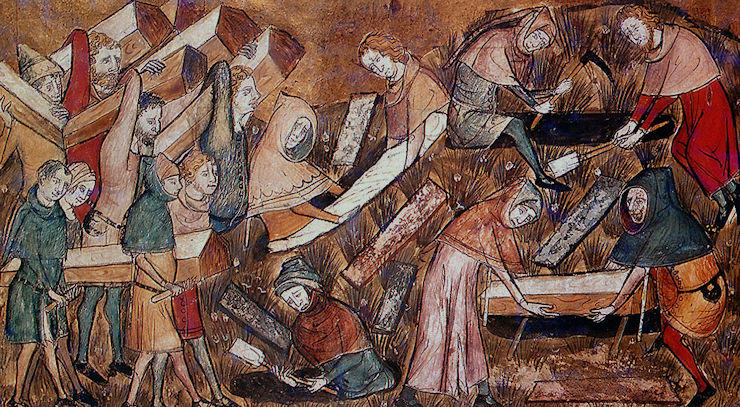 The miniature shown above depicts quite a different picture. Despite the large multitude of corpses, the citizens of Tournai, Belgium still attempt to bury all the deceased in separate graves. Most are to be buried in wooden coffins.

Today, isolation of the patient is still part of the treatment for pneumonic plague. Because of it’s infectious nature, the pneumonic plague is contagious via airborne respiratory droplets.

We have seen hygiene habits and isolation measurements as effective methods of disease prevention and control in the absence of medicine. These methods are still being used today.

The plague is now virtually extinct in Europe (but not in some asian countries). Modern healthcare has provided the population with vaccines, preventive care, information, and treatments which have left many diseases in the past.